From AUD $99.00
Diving AND making the world a better place. What better way to spend Clean Up Australia Day 2020?! Start the morning on the beach, helping to clean up and preserve our pristine local coastline, then head out the ocean for a single dive on the incredible local wreck, Ex-HMAS Brisbane.

Located less than 3 miles offshore, this decommissioned guided missile destroyer now serves as an artificial reef and home to many marine animals, a natural environment that is so worthy of protecting and cherishing. The wildlife on land and the ocean will thank you!

Spend your Sunday with like minded and conscious people. We will be hosting a sausage sizzle upon return from the dive to debrief and share in the beauty of such a positive and meaningful day.

Use your passion for the ocean and do something proactive and fun to give back to the marine environment you love so much. Be the change and make a difference!

Spots on the dive trip are limited, but anyone can join in for the beach clean up! Bags and gloves included!

Let us know if you have any special dietary requirements (ie Vegetarian) for the BBQ!

Timeline of the day:

9:30 Meet at Shop to check in for your dive and get gear organised

12:00 Jump aboard for the charter out to the wreck

Each diver will be given a thorough briefing about the dive as the boat traverses the calm waters of the Mooloolah River. Once the boat is at the wreck and moored, the crew will help get divers into the water. The dive will last for 50 minutes, or as soon as a diver or their buddy reaches 50 bar, whichever comes first. The divers then return to the shop, where gear is washed for you.

2:30 Return to Sunreef shop for a sausage sizzle and presentation by a guest speaker!

Dive one the world's best wreck sites, the Ex-HMAS Brisbane, a decommissioned guided missile destroyer. Located just 2.9 nautical miles offshore which makes it an easy venture out and is available to dive all year round.

Sunreef has exclusive use of the two midship moorings, making for two leisurely dives that allow divers to comfortably and safely visit the entire wreck.

Explore the outside of the wreck and encounter an abundance of local aquatic sea life that inhabits her. Discover the depths of her hull, enter the engine room or even visit the control room where her kill switches are still intact.

The vessel now serves as a world-class artificial reef and diving site. She has attracted divers from all over the world. Divers from Open Water level, to Divemaster, Instructors, dive shop owners and ex-servicemen who served on the HMAS Brisbane all sing the praises of this great wreck dive; She seems to be in the perfect diving spot. Sitting bolt upright the Ex-HMAS Brisbane has 15 metres of water over her forward decks and 18 metres over her stern. Consistently good water clarity and minimal swell makes for great diving. Just one dive on the Ex-HMAS Brisbane, and you readily understand why Sunreef is privileged to have been issued a licence by the Environment Protection Agency of the Queensland Government to conduct dive trips on the former HMAS Brisbane. The dive is phenomenal. There is certainly a lot of ship to see.

Just cruising around the outside, its sheer size makes it an awesome sight. Water temperatures range from 17C in winter to a summer high of 27C. Visibility averages around 15 metres but up to 20 metres or more is not uncommon. Environmental studies commissioned by the Environmental Protection Agency and conducted by scientists from the University of the Sunshine Coast and Queensland Museum confirms the diversity of marine life that has made the Brisbane home.

Local inhabitants include a large bull & eagle rays, angler fish, lionfish, blennies, nudibranchs, sea hares, squid and a school of juvenile red emperor and snapper. Other visitors include a shovelled nose rays, greasy cod and eagle rays. An octopus has made a home in a pyrotechnic tube on the deck. A resident school of predatory yellow tailed kingfish now ‘buzz’ the schools of of bait fish that surround the Ex-HMAS Brisbane. Up to 10 huge Queensland grouper have been seen at one time off the bow of the ship. A turtle has taken up residency on the aft funnel and eagle rays cruise between the 2 funnels. There’s also a huge amount of soft corals to be seen and hard corals are really getting established as well.

History of the vessel

The vessel: Commissioned into the Royal Australian Navy in 1967, the HMAS Brisbane was a 133 metre Charles F Adams Class DDG guided missile destroyer of approx 5000 tons. The HMAS Brisbane served Australia faithfully for 34 years, till she was decommissioned in 2001. She served in both the Vietnam and Gulf War and assisted on many humanitarian missions such as in Darwin in 1974, after cyclone Tracy.

Her new life: In January 2003, the Queensland Government agreed to accept the decommissioned HMAS Brisbane from the Commonwealth Government for sinking off the Sunshine Coast as an artificial reef and dive site.

The scuttling: After extensive and careful preparation, the ship was towed for its last journey to the Sunshine Coast. With the expertise of a crew who had extensive experience in scuttling ships for artificial reefs, explosives were carefully positioned in specially made wooden frames hard against the inside skin of the ship, below the waterline. On the 31st of July 2005, at a site 2.9 nautical miles east of Mudjimba Island off the Sunshine Coast, these explosives were detonated and in 2 minutes and 10 seconds, the former HMAS Brisbane was on the bottom in 28 metres of water.

Please enable cookies in your browser to place a booking

Please note: After your purchase is confirmed we will email you a confirmation.
Contact us 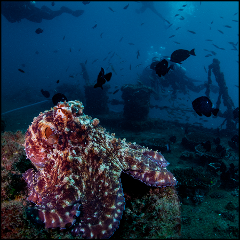 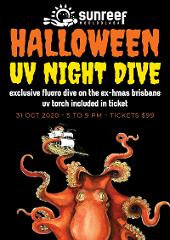